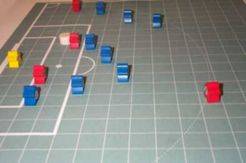 Schaumermal is a board game aimed at simulating a federation football (henceafter simply called football) match. Each player manages a team of 11 players (10 players and a goalkeeper) on a rectangular board with the lines of a football pitch printed on it and overlaid with a grid. In a regular game, the two players set up their teams (of 10 players and a goalkeeper) in their halves. One side is nominated the home team (the other, the away team) and starts off the game. The game is played in turns. During each turn, the team in possession of the ball passes or kicks the ball, and moves 3 players. The opposing team then moves 3 of its players to interfere with the other's play. Different playing positions of the team (e.g. striker, dribblers, etc) move differently. The aim of the team in possession of the ball is to put the ball into the net of the opposing team (thus scoring a goal), and its opponent aims to stop it from doing so by blocking the paths towards goal and tackling opposing players to gain possession of the ball. Whether a ball is kicked accurately to its target location or how much it deviated off-course is determined by the roll of a die. The results of tackles are determined by comparing dice rolls. The game lasts until a pre-determined time elapses (in which case the team who has scored the most goals wins) or a team has scored a pre-determined number of goals (and wins). The game includes rules for variants such as Hocus Pocus cards that allow players to change the events of play, customization of each individual player (introducing ability points and skills), and league play.