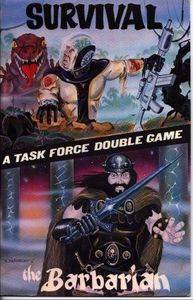 This is a Task Force Games Double Game, consisting of two complete games within one package. Both games originally appeared in White Dwarf magazine, and were later released together as one of their pocket games. Survival! is a science fiction game depicting the struggle of Jardine, a crashed Scout, to reach safety. Along the trek he will meet and fight various vicious animals. While Survival is an excellent solitaire game, there are scenarios for up to six players. The Barbarian is a fantasy game for one or two players, depicting the quest of Vaarn the Barbarian to locate and recover the lost sword and shield of the Old Fathers.