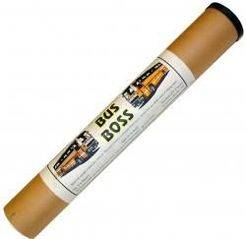 Bus Boss is a follow up to Railway Rivals/Dampfross that is simpler and plays faster. Similarly to RR, the players draw routes they control on a map in the first part of the game and race to/from randomly determined cities. There are some important differences. In the building phase: Instead of building a short section of track each turn, players buy an entire route between 2 cities. The price of the route is determined by its length + $2. This continues until one player has less than $50 left. This speeds up the building phase considerably. In the racing phase: All players who compete in the race receive a share of a pot of $30. Ties on the same number of dice rolled, split their shares of the pot. Many maps for different countries have been published.