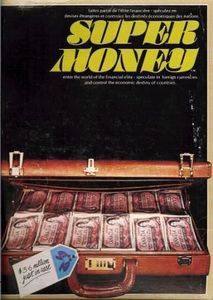 Players speculate in six major world currencies with the goal of becoming the richest player at the end of the game. This is done by buying currencies, manipulating their prices by playing market cards, and striving to control currencies when they are revalued and bonuses are paid. Similar to Acquire in that players compete for majority-holder bonuses, and can manipulate currency values by playing cards out of their hand.