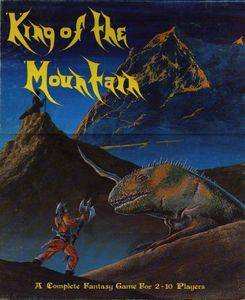 (From the introduction) King of the Mountain is a moderate skill-level strategy game for 2 to 10 players, Ages 8 and up. The object of the game is to be the first player to have his/her character reach the Citadel at the top of the mountain, which is the center hex of the game board. Players guide their character-counter from the board's edge, which is the base of the mountain, along paths and through tunnels in order to get to the peak. Attempting to stop the players is a malevolent Wizard, played by one of the players. The Wizard controls the different monsters on the mountain, causing them to seek out the characters and do battle with them. The object for the Wizard player is to see that no one reaches the Citadel. Depending on the number of players, the game should last between 45 minutes (two players)and 3 hours (10 players). (additional comments) One of the nice things is that each character can customize the stats and equipment of their characters.