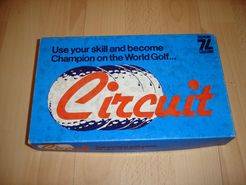 "Use your skill and become Champion on the world Golf CIRCUIT" Circuit is a golf based board game made by a pro golfer in 1980. There were 500 made and they're out there somewhere. The game is due for re-release sometime this year (2002) after extensive redevelopment. The game is played on a felt playing area with tournament cards and bonus/chance cards. Dice are thrown to move around the board and the idea of the game is to win money from competing in grand golf tournaments across the world. The mechanics of the game also uses handicaps and accurate scoring as in real life.