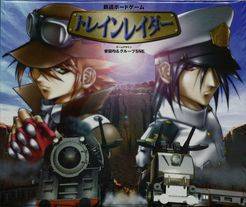 Train Raider is a board game designed and produced in Japan. It has some parallels to the Empire Builder systems in that you build networks by drawing on the board, but the similarities don't extend too far beyond that. The winner is the player who receives the most "honor points", and you can gain honor points in three different ways: 1. Building your network to connect to more towns, cities, and big cities 2. Destroying other people's trains during missions 3. Successfully completing missions Train Raider is fun to play and the "battles" are not serious. The game is beautifully produced and as far as I know is available only in Japan. Expanded by: Train Raider: Europe Expansion