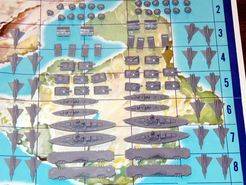 In the late 1950's this game was sold in ads in comic books. You could order a copy for $1.25, complete with 2 boards, rules, and over 80 plastic pieces. This game is very similar to Battleship, with a few additional rules. Each player has a gameboard (printed on cardstock-paper), later boards from the late 70's were printed on plastic with no backing at all, with 3 islands on it. Players place all of their units on their board (secretly; you can't see your opponent's board) at the beginning of the game. Units consist of Head Quarters, Tanks, Pill Boxes, Battleships, Destroyers, Landing barges, Aircraft Carriers, and Planes. The objective is to locate which island the enemy HQ is on (when you sink the enemy Battleship, they must tell you if their HQ is on the North or South half of the board), destroy all enemy installations in that island, and send a landing barge to occupy it. You can also win the game by destroying both enemy barges (so they have no way to land on your HQ island anymore) or by destroying all enemy planes and ships (they can no longer attack). Jean Shepherd (best known for the movie "A Christmas Story") mentioned an ad for Task Force on his June 18, 1963 radio show. It's not clear if he is discussing game 2982, 13059 or another version of this game.