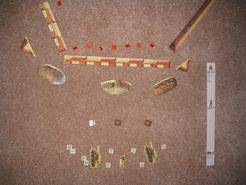 Published within A Book of Sandhurst Wargames. A simulation of combat at squad level on the Pacific atolls 1943-44. Men Against Fire is a role playing game for 3 or more participants, inspired by S. L. A. Marshall's discussion of the isolation and emptiness of the modern battlefield. The game uses a games master (GM) to prepare the scenario and play the enemy against a team of players who are all on the same side. Only the GM is allowed to see the terrain pieces and counters. The players sit facing away from him and from each other, and only communicate verbally with each other and with the GM. Scale: 1":3 yards (1:100) - 5 minute turn (approx. real time). 1 die 48 cut out sheets with personal victory conditions for individuals 60 status markers 30 counters for American soldiers 15 counters for Japanese soldiers