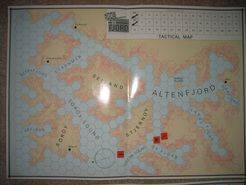 Published within A Book of Sandhurst Wargames. A simulation the naval campaign around northern Norway. 1941-45. Fjord is designed to represent a complete campaign which lasted for nearly four years and involved hundreds of ships. The overall game is played as a series of several small games some of which represent a sequence of action at the strategic level ('convoy operations') while alternate ones represent tactical actions (fjord raids) against Tirpitz in Altenfjord. In both types of action the rules for concealed movement are especially important. 2 maps: Strategic map showing the North Cape of Norway with a part of the Arctic Ocean, and a tactical map of Altenfjord. 1 die Strategic: 2 score markers 1 ops marker 1 time marker 1 weather marker 10 German scenario cards 60 markers for stacks of units 40 British and German unit counters Tactical: 72 unit counters including 16 dummies