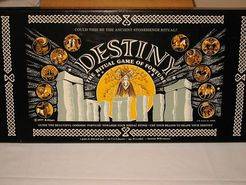 Destiny, the Ritual Game of Fortune, concerns the journey through Life as the players try to keep Fortune nearby from Birth to Death. The large board is themed with the signs of the Zodiac and has 5 concentric rings (orbits) and spirals forming the path of life. There is a large (11cm) latex statuette of Lady Luck and players spend tokens, representing years of their life, to an altar to move themselves and the statuette around the board. They can also block spaces with fire tokens. When each player has spent all its tokens, it has died. When the last player dies, whoever Fortune is nearest to, first collects tokens from the altar as a multiple of their age (the orbit they reached) by the number of players. The next player does the same, but multiplied by one less and so on. Presumably the basic game ends with the player with the most tokens winning (the rules don't say!). The advanced game rules allow additional variants, such as bidding or bartering or a quiz based game. One variant goes on to use the won tokens as the start of the After-Life and the designer, Dr Bronia Grycz, encourages players to develop their own rules. The box has copyright 1977.