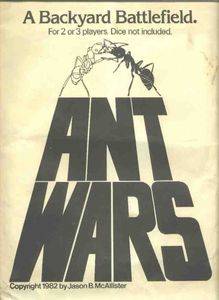 Players control a tribe of either black, brown or red ants battling it out for control of your backyard. Queens lay eggs which hatch into workers, soldiers and more queens. Soldiers fight for the best food-gathering areas. Every so often there is a disaster, i.e. Billy blows up the whole anthill. The game is about controlling expansion and choosing the right population mix. A soldier is worth three workers in battle, but useless for gathering food. Queens are defenseless. It is also about choosing the right area. Those rich in food are disaster-prone while the safe areas are less productive. Includes large envelope, 8-page half-size rulebook, 32 cards, 2 11"x17" map sheets and 189 very nice 1" die-cut, silk screened counters on heavy cardboard.