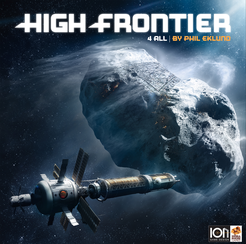 The 4th edition of Phil Eklund's signature game High Frontier. It all started with Rocket Flight. This game had the ambition to let "Each player start as a space faring company in the year 2020 trying to make a profit in trade and technology development." We are now at 2020 and High Frontier 4 All will turn High Frontier into an game system open for additions and modules. This will enable the active and brilliant community around High Frontier to continuously evolve it. The game comes in a Core box, which contains the previous edition's basic and advanced rules. The rules have been given a complete overhaul in order to make them watertight and accessible. Modules of additional game content will be published over time that adds gameplay and mechanics to the game. In High Frontier you represent a space enterprise, in the near future, spanning about 100 years from now. Your goal is to initiate the exploration and industrialization of the solar system. The game has several variants but the main goal is to build factories on various locations in the solar system. To do this you need to be smart when developing technologies and daring but precise when navigating the solar system with your space craft. High Frontier's iconic map is the most complete representation of the solar system in any game ever published and your options and combinations for strategies are next to limitless. Transition rules are included so that High Frontier works as an independent 4th stage in the Bios:Earth trilogy (Bios:Genesis, Bios:Megafauna and Bios:Origins) about the evolution of life on our planet. —description from the publisher