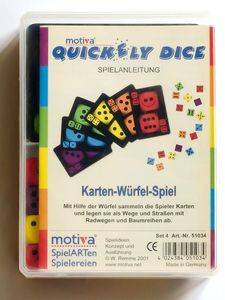 Quik E Ly Dice is part dice game, part card collecting and melding game. A single set consists of 8 dice in 2 colours and 54 cards, 27 of in each of the same two colours as the dice. One set is suitable for two players, and there are three sets in all; Using all three with half the 162 cards allows up to six players. The cards depict two dice faces, one above the other. The object is to score points by collecting and then melding the cards, a la rummy. Players may meld numerical sequences of up to 11 cards, scoring 1 point for each card in the meld. These sequences must be along the top row dice face of the cards. Bonus points are scored for also forming certain combinations along the bottom row. For example, a sequence showing Red 1/4, 2/5, 3/6, 4/6 would score 16 points; 4 points for the 1,2,3,4 sequence along the top row, multiplied by 2 for all the cards being the same color, multiplied by 2 again for the 4,5,6 sequence along the bottom. There are several other bonuses which may be scored. The mechanics of the game are very simple. Several cards will be face up on the table at any one time. Each player may roll up to 3 of their 4 dice in an attempt to capture 1 or more of these cards. Cards are captured by rolling the two numbers corresponding to the two dice on a card. Thus, rolling a 1, 4, 5 will allow you to capture a 5/1, a 4/1 or a 5/4 card, provided they are available. If a player rolls just one of the numbers on a card that he/she wants, that player may "reserve" that card by placing the single dice on the card. If the player subsequently rolls the second number in a later turn, he/she can take the card. Reserved cards may still be captured by other players.