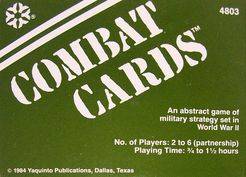 "An abstract game of military strategy set in World War II" This card game is played in partnerships by two, four or six people. Each team represents the combined resources of a bloc of nations at war with the other team. Points are accumulated by conducting offensives, opening new fronts and successfully countering enemy offensives. The game ends once all the cards have been drawn and played. On your turn, you may shift a combat card between two of your fronts before drawing and playing or discarding a card. Fronts are prepared face down, until the offensive is declared. Fronts are laid out like in Caesar &amp; Cleopatra (or Hera &amp; Zeus --those kinds of games). Cards come in two types, combat and "special". The combat cards represent units of infantry, armor, mine fields and so on. Special cards include Strategic Bombing (which permanently reduces a player's hand size), New Front, Offensive/Supply (which launches or sustains an offensive, or can be used to shift Airborne combat cards between fronts). Points are scored mostly during offensives; every turn an offensive goes on, the difference between the attacker's total offense and the defender's total defense is scored by the stronger side. There is also a bonus point score when opening a new front. The cards are very bland looking with a simple APP-6 or SPI-style symbol, a pair of offense/defense ratings and some explanatory text. Most combat units lack character: Armour, Infantry and Combat Engineers work nearly the same way except for their different offense/defense ratings. I'd have given the Combat Engineers a special power against Mine Fields, for example.