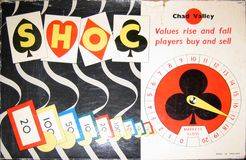 The game of SHOC (which stands for Spades, Hearts, Diamonds (diamond shape for the 'O') and Clubs, is a game of trading shares in each of the four suits of a pack of playing cards. Two packs are used (not provided in game) , with one representing the share certificates and the other being used to induce market changes which are recorded on the dials. Each player takes a turn as broker, and sells certificates for points or buys them back until the market closes; the next player then takes over as broker. After a round of each player being broker, the points are totaled for each player with the greatest amount winning. This game was produced during wartime; it is unavailable now but it can be played without the components provided and with just pen and paper.