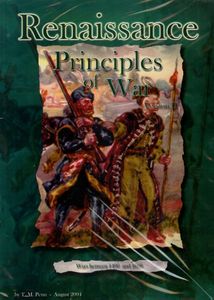 The period starts in 1496 with the French invasion of Italy and ends in 1660 prior to the wars of Louis XIV. The beginning of the period saw the pike as the main weapon to enable a foot soldier to stand against mounted opponents. The pike was used throughout the period supported by or supporting an increasing number of shot troops, only falling into disuse when the introduction of the bayonet merged the fire and shock capability of the infantry into one man. This period saw the development of the gunpowder weapons from simple handguns and bombards of the middle ages to the mobile cannon and muskets that ruled the battlefield until the 19th century. Like all the Principles of War rules, these rules have a simple mechanism with the emphasis on leaders' command and control. This is to represent the problems of commanding troops in battle which confronted kings, princes and mercenary leaders., rather than how many casualties each unit was taking at each stage of the battle. Major European conflicts ( including the English Civil war and Thirty Years war) covered in the 64 army lists. Now includes armies for Asia including Japan and Korea.