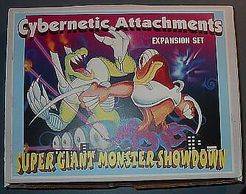 The "Cybernetic Attachments" expansion set for "Super Giant Monster Showdown" adds approximately 190 new cards for use with the base game. If you've created your monster all the way to its Power Sources and still find it lacking "oomph", a new set of cards called Cybernetic Attachments can be used to augment Monsters during the creation phase with wheels, cannons, lasers, the ability to emit drones, heavy duty armor, signal jammers (for controlling an opponent's Defense Units) and more. Each Cybernetic Attachment card functions as a body part, 1 unit of Cyber-Power (like the power sources from the base game, Gaia,Alien,Chemical,Radiation,Fire,Electricity), and 2 points of Armor! These account for 90 of the new cards, the other 100 consist of new Bio, Physical Modifiers, Powers, Map, and Event cards. Also included are some new rules (the "Monster Challenge"), and new attack types ("Sticking Holds" and "Life Drain").