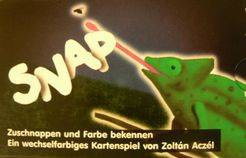 The Snap deck consists of 60 cards in 4 color suits. The cards are numbered front and back from 1 to 15. The game is played in two phases. In the "cool phase," players draw and discard cards in turn order, with the stipulation that the discarded card must be higher in value than the one drawn. This continues until one player is satisfied with the mix achieved in his/her 7-card hand and calls "Snap." At that point, the "hot phase" begins, with players slapping cards at will - although one at a time - on the discard pile. When two cards with with matching color are placed one over the other, that suit becomes the winning suit. Players then score points for cards of that color in their hand. Players also score for all other cards of any color with numbers matching their winning-suit cards remaining in other players' hands (except for cards valued 10 and above). It is suggested to play as many rounds as players in the game, with the player achieving the most points overall winning.