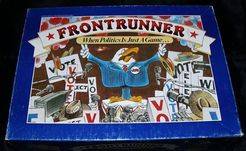 A "humorous" political board game in which players are candidates for the nation's highest office. Players must choose which states to campaign in, how you will spend your $30 Million dollar campaign budget, how to fend off the attacks of opponents, and how to avoid career-ending scandals. The game stresses the humorous side of presidential politics through the use of political cartoons. "Media Cards" feature the headlines of real-life prominent daily national newspapers (such as the Arizona Republic, Washington Post, Detroit Free Press, Chicago Sun Times, etc). "State Cards" feature historic and geographic highlights of each state. The game lasts through 30 days (turns) of a campaign (or 15 days for shorter games). The winner is determined by which player has the most Electoral Votes (out of the 538 actual votes). The game was updated in 1994 with minor changes to the rules.