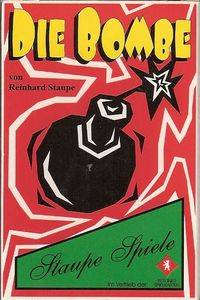 In each round, 2 cards are placed face up. Players then secretly bid on for those cards. The highest bidder can pick one of the two cards to keep. However, that player also receives minus points in the amount of his bid. The player with the second-highest bid gets the remaining card for nothing. The cards There are 6 bombs, 12 red and 12 green value cards. The value cards are worth from 3 ?25 in both colors. The values ascend by twos: 3, 5, 7, 9 ... 25. Preparation Each player receives a paper and a pen. Each player prepares a small table for the minuses on his paper. Leave enough space for bids beside the table. The bombs and the value cards are first separated. The value cards are mixed, and 2 are put on the table face up, side by side. The remaining value cards are now shuffled well with the 6 bombs and the stack is placed face down in the middle of the table. Play Each player secretly makes a bid. All players must bid at least 1. Bids can be no higher than 40. Now all players announce their bids. 1. The player with the highest number writes it in his deficit table. Now he can select one of the two face-up cards and keeps it in front of him. 2. The player with the second-highest number takes the remaining face-up card and keeps it in front of him. He does not write in his deficit table. Now all players cross out their listed bids. The top two cards of the face-down stack are uncovered and the next round is played in exactly the same manner. Subsequent rounds are played in this way until the stack is completely spent. Then the final scores are announced. Each player must display all cards won in plain view, with colors separated. Each individual number must be visible. The bombs When a player takes a bomb, it must be played immediately. The player gives the bomb to a player of his choice covering one of his red or green value cards! The player receiving the bomb must set it and the covered value card aside so that it will score nothing at the end of the game. What happens if several players tie for the highest bid? Only the players who tied for the highest bid continue to bid on the card. Only 1 card is up for bid and the remaining face-up card is put aside. Final score First the red cards are totaled, then the green in the same manner. Each player adds the values of his red cards. The player with the most red cards doubles the sum of his red cards; all others receive only their normal red-card points. If several players tie for the most red cards, all these players double their red points. The points for the red and green cards are added. Minus points are subtracted. The total value of all cards won and minuses are announced at the end the game. The player with the highest score is the winner.