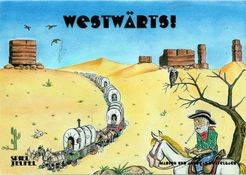 On his last long ride through the wide and wild West, the experienced expedition leader McTrucker realizes that he's getting too old for the job – but who will take his place? One of the greenhorns accompanying the current expedition? To find out which of these greenhorns might be best for the job, McTrucker gives each of them a mission on the final day of the expedition – and to make sure he finds out how they fare against one another, the missions all bring them into competition with one another. Only the one who can enforce his will best over the others and best deal with unexpected situations will merit being appointed expedition leader. To set up Westwärts, twenty wagon cards – along with settlers, gold mines and even a scout, barber, preacher, teacher, cook and gravedigger – are placed beside a munitions wagon. Five cards each are randomly distributed on four area cards (pastureland, desert, Indian country and mountain country). Thirty job cards can be completed, four of which are laid out face-up with a reward of 1-3 gold nuggets for each when completed. The progress of the wagon train is controlled by cards, with each player holding three in hand. While game flow is simple, fulfilling demands is not always so. Each player places a movement card face down. The current player reveals his own and that of another. With these two cards, he then resolves the wagon train movements and tries to fulfill jobs. The game ends when a player has earned 15 nuggets or fewer than four incomplete jobs remain. Some jobs are simple with small payoffs while a more difficult one would require, for example, equipping one area with three settlers and two gold diggers or placing the preacher between a settler and a gold digger. In such cases, often the second card is of no help unless players make special arrangements with one another: You scratch my back, I scratch yours. Special cards do things like eliminate or paralyze certain wagons due to fire or broken axles.