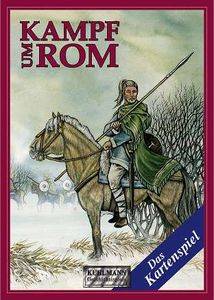 The Fight for Rome - the Card Game is the card version of the board game of the same name (Kampf um Rom / The Fight for Rome). It deals with the preservation, loss and development of cultural achievements in Europe from the 4th to the 10th Century (the transition from the Ancient to the Middle Ages). Each player pursues the goal of developing as many Achievements of the best quality as possible, by placing his own counters onto the game board. Disasters and invading barbarians may impede cultural development by the play of cards to ruin specific Achievements. The winner will be the player who has collected the highest combined value of Achievements (as he is leading the way into the Middle Ages).