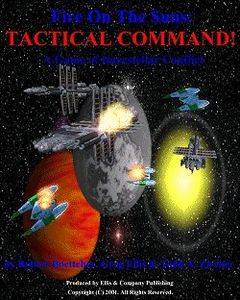 Fire On The Suns: Tactical Command! is a fast-paced, easy-to-learn game of interstellar conflict set in the Fire On The Suns game universe. Designed to be learned in half an hour and played in an hour or less, FOTS: TCOM will allow players to play out a scenario on their lunch break and an entire campaign over a weekend. The basic game rulebook contains all rules, maps, and counters necessary to set up and play hundreds of different scenarios between the Terran Federal Republic and the Empire of Kahs including the introductory 4-scenario mini-campaign "Border War". Contents: One 52-page rulebokk 416 color 5/8" cardstock counters Two 11"x17" hexmaps Two Fleet Control Cards One Firepower Resolution Card Price: $6.95