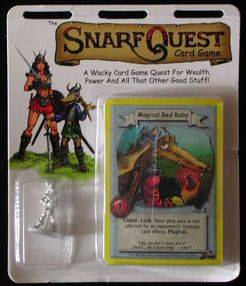 The King is dead! Who will lead the Zeethvahs? According to Zeethvah tradition, every warrior is eligible to rule. The rules of succession are simple.... one year from this date, the warrior that has aquired the most riches or has performed the most heroic deeds will become OUR NEW LEADER! The goal of the Snarf Quest Card Game is to take our hero Snarf through a grand adventure and acquire as much treasure as possible. Each player is making his own adventure for Snarf. At the end of the game, the player with the most treasure is declared to have the best Snarf adventure and becomes king of the Zeethvah village and WINS! There are two basic departures from most card games. One, everyone draws from the same deck (known as the storydeck). Two, nobody ever holds cards in his hand. All cards are displayed where everyone can see them. During each players turn, he controls Snarf (represented by the supplied miniature) and his actions. You must spend Action Points to move Snarf up and down the storyline (ten cards placed side by side next to the storydeck). As these storylines are activated, they are removed, the story line moves together and a replacement card is placed in the storyline next the the storydeck (the draw pile). Activated cards can help you or hurt your opponents, depending on what happens in the storyline. At the end of the game, the player with the most Treasure Points, Wins. The basic game comes with 50 cards, a snarf miniature and is made for 2 to 3 players. However, with each additional 20 cards you add to your deck, one more player can be added. 5 is the recommended maximum. 20 card expansion sets can be purchased that also include a new miniature. Each of these expansions is based around a different character from the Snarf Quest comic strip. This is not a collectable card game, all starter and expansion decks are identical. In 2003 the game was reproduced as a new version of the game which comes with a 100-card deck and one Snarf miniature. There are no expansions for this edition of the game. Expanded by: Snarfquest Expansion 1 (Suthaze) Snarfquest Expansion 2 (Telerie) Snarfquest Expansion 3 (Aveeare) Snarfquest Expansion 4 (Raffendorf) Snarfquest Miniatures Bonus Pack