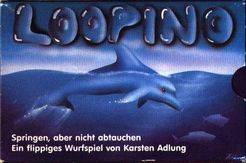 A card-flicking card game in which a target card depicting some tasty fish is placed on the table and players attempt to flick (actually, according to the rules, this is a wrist-toss rather than a finger-flick) cards depicting dolphins as close to the target as possible - the twisting motion of the flicked cards is supposed to represent the playful antics of the dolphins. A crosshair appears in the corner of each card, and distance is measured by the closest crosshair on the flicked card in relation to the closest crosshair on the target card. The number of cards to be scored is determined by the number on the closest card to the target (i.e. if a "4" card is closest to the target, the four closest cards all will score). Each card scores a number of points equal to the face value of the card multiplied by the number of crosshair symbols on the card that remain uncovered. If all four crosshairs on the target are covered, the player covering the last takes a penalty, as does any player causing the target card to fall off the table. Suggested game duration is as many rounds as the number of players; highest point total wins.