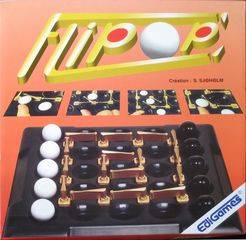 The Flipop board consists of a 5x5 grid of spaces. In each of the 16 intersections between four spaces, there is a post holding a door that can swing around so that it blocks access between any adjacent two spaces of the four spaces around it. Each player has five balls on his side of the board. The object is to move the balls across the board, at which point they are removed from the game. To move, you must push a ball through a door. If there is a ball in the space beyond the door, it will be pushed -- this can cascade indefinitely. But a move is only legal as long as each ball lands either in an empty space or goes through another door -- balls cannot touch each other. The winner is either the first person to remove all his balls from the board, or the player with the fewest balls left when no legal moves remain.