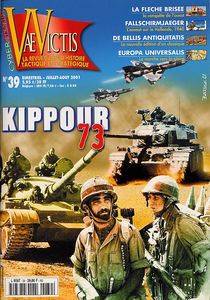 This is an operational game covering the Golan and Sinai battles of the Yom Kippour war in 1973. It is a moderate-complexity wargame using an Operation Points system where combat and movement are done within a given unit's phase. Players alternate activating formations. The rules are in French and are complete, although somewhat murky at times. The game may have benefited from a more rigourous editing effort. As usual with VV, beautiful components. All in all, a robust effort from the Vae Victis team.