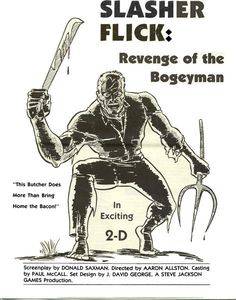 From the publisher: Slasher Flick: Revenge of the Bogeyman in Exciting 2-D "This Butcher Does More Than Bring Home the Bacon!" Simulates the action in body-count movies such as Halloween, Friday the 13th, Silent Scream and others. One player represents the Bogeyman, a superhuman maniacal mass murderer, and the other takes the part of the collection of victims he intends to murder. Movement of the 14 characters including a Bus Driver, Whiz Kid, Football Player, Surfer, BMOC, Biker, ROTC, Psych Major, Cheerleader, Jockette, Preppie, Valley Girl, Ingenue takes place on the map. The victims try to stay alive as long as possible. Each character has a unique set of attributes for movement, special abilities, disadvantages and damage. Can be played as a board role-playing game (and thus expanded past just two players). One player takes the role of the Bogeyman; other players take the roles of only a few of the victims. This can lead to some animated conversation between the Victim players, sounding suspiciously like the real thing. Developed by Aaron Allston. Art by Paul McCall. Map art by J. David George. Published in Fantasy Gamer #1.