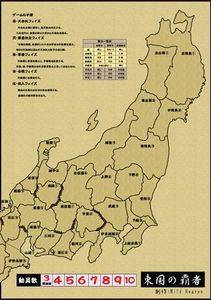 Also known as 'Conquerors of the Eastern Country'. A 2-6 player game set in feudal Eastern Japan(2-12 players if combined with Heroes of Western Japan). Meant to appeal to fans of the many feudal multi-player games that came out in the 80s in Japan and of 'eurogame' fans wanting something quicker. It ends up playing like a fast-paced 'History of the World'. Not in the 'multiple epoch' sense (the game does not cover multiple eras), but in the sense that attacks are done by 'expanding out' and attacking adjacent territories with newly hired units, and a placed unit is never actually moved. Each player controls a different daimyo, each having tis own unique (and fairly important / useful) power. There is a deck of Fate cards that give valuable bonuses and abilities to the players that get them. Players bid each turn on the right to get 1st pick of the available cards that turn. Money is received from territories, varying in value from 1 to 3 per territory. Gold is spent buying the 3 main types of armies can be hired to attack with, bidding for card choice, and paying to maintain the effects of 'continuing cards' Victory is done by getting a point per territory held at the end of the game, with bonus points (or penalties) given for tea bowls placed in various territories throughout the game. The catch is that only the player who placed each tea bowl knows its value (and thereby, how important it is to get/retain control of that territory). It's a DTP game, meaning that you need to stick the counters on your own blank counters. This can be combined with Heroes of Western Japan to get a larger game covering all of Japan.