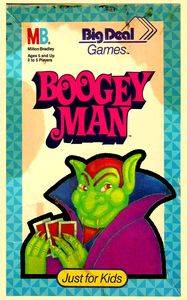 In this fun little children's game, there are 60 Monster Mania cards depicting the Boogey Man and other inoccuous objects (scary tree, fraidy cat, coat on a rack...) which are easily confused with it at first glance (sharing colours and shapes). There are one less pillow tokens than players (à la musical chairs), and each player receives flashlight chips at the outset. The cards are dealt out to the players, face down. Every one simultaneously reveals his top card. If you think one of the cards is the Boogey Man, you scream "Boogey Man!" and try to grab a pillow; the other players must first scream, then try to grab a pillow as well. The player left without one (if it *is* the Boogey Man) loses a flashlight chip. You lose a flashlight chip if you caused a false alarm. (You also lose a flashlight if you forwent screaming, or screamed "Boogey Man!" a second time) The player with the most flashlight chips left once another player runs out wins. Can be played with up to 9 players when two sets are combined.