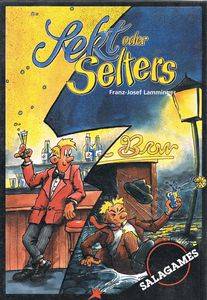 Theme "Lola's Bar" is very popular and crowded. The way to the counter is long, and everyone else is trying to get there too in order to get the best drinks. Hurrying a little and elbowing your way through the bar is okay, but if you aren't careful and overshoot the mark you're back on the street again. Goal Collecting as many points as possible by winning the most valuable drink cards. Game play The board shows Lola's Bar with a couple of tables, a parcours consisting of several spaces, and the counter. At the counter, you can get sparkling wine ("Sekt") or soda ("Selters"). To reach the counter, you roll the dice. On each turn, you roll up to three times and move one of your four pawns the corresponding number of spaces. Pawns have a value of 1-4. For the first roll, you use one die, for the second roll two dice, and for the third roll three dice, and you have to use the same pawn in each of your up to three rolls per turn. In between rolls, you can decide to stop and end your turn. If one of your pawns reaches one of the four counter spaces, you get the top sparkling wine card (sparkling wine cards are stacked face up). Sparkling wine cards mostly have positive values, some of them show a dot before one or several zeros (.0, .00, .000). The dot means that you use your pawn that reached the counter to determine its value, i.e. if your pawn with value 4 gets the .000 card, it is worth 400 points. The pawn is put on the card and stays there for the rest of the game. If you roll too high and your pawn passes the counter space, you get served soda, i.e. you draw the top of the face-down soda cards. Soda cards mostly have negative values (-10 to -1000), and there is also a card which bans you from the bar (i.e. your token is removed from the game). If you land on a special space, you have to use this particular pawn. There can only be one pawn per space. If you'd land on a space that is already occupied, the other player decides which closest free space (either backwards or forwards) you have to move your pawn to. The game ends when one player has no pawns left. The player with the most points wins the game.