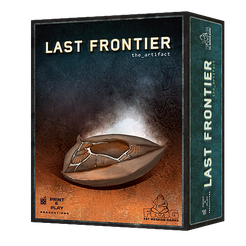 Description from the publisher: THE ARTIFACT is a space opera using the Last Frontier: The Vesuvius Incident game system (published by Fat Messiah Games). Three to eight players take over such roles as the Mad Scientist, the Space Pirate Captain, the Phone Company, or a mystery Alien. Because the format is four way blind, and the players are uncertain of each other's motives, the fog of war is a formidable obstacle in this new gaming genre. The action takes place on a space warehouse at the edge of an un-navigable region of the Galaxy known as the Coal Sack. The mad scientist in charge of the facility is trying to sell the Artifact, an alien navigational buoy, to space pirates. The scientist wins if he completes the deal while keeping his illegal activities secret from the Phone Company, who has a couple of agents on board the station somewhere. Victory for the Phone Company depends upon who their secret employers are. His agents may be just innocent employees here to fix the phone lines, they may be working for a rival Museum, or they may work for the Government or private agencies. The Pirate Captain's motives are more transparent; he needs to get the Artifact by trade, artifice, or force. Even with his overwhelming firepower, this is not easy. One of his men may be a government informant. The Artifact may not be all it seems. Loss of contact with his men may mean they have turned against him, or alien bugs have laid eggs on their disemboweled remains. A clank outside may signal imminent explosive decompression, or just a sailmaker robot on the outside hull doing its job. Aliens may or may not be on board; their nature is unknown. The ship's computer may or may not be a sentient character working with its own victory conditions. One's partner may be a trusted companion or a shapeshifting fiend in disguise. The ship's security system, robots, and self-destruct countdown may be puppets for unknown agencies. The Artifact is a gripping drama, full of surprises and mayhem. No two games are alike, full of sabotage, sneak suits, bluster, kamikaze aliens, EMP and plasma guns, booby traps, hacking, and the prospect of the space station being blown up bit by bit by pirate cannon. The action never falters until the last lifeboat is away, the final alias revealed, and the last storeroom explored.