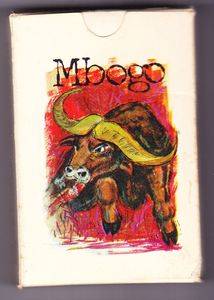 Mbogo is a card game for 2-6 players originally published in the late 1970's by The House of Ideas. The copy on the box reads as follows: Mbogo -- the African Cape Buffalo. The most feared animal in the jungle. He is the fiercest if wounded or bothered. He charges with his head up until the last second and seldom misses his victim. He charges not from fear but from cold, calculated revenge. Watch for the Mbogo card in this fast moving game. Mbogo the terrible. Components Deck of 61 cards including 7 Antelope 7 Elephant 7 Gorilla 7 Lion 7 Rhinoceros 7 Wart Hog 11 Cage 7 Hunter 1 Mbogo