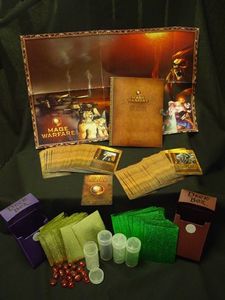 Mage Warfare is a new CCG created by a NH teenager. After years of playtesting, it was brought to market in October 2005. The story concept is that you are a Mage in the Exocosm, the plane of existence that surrounds and connects all realities. You can pull warriors and weapons from any reality to do battle for you. Thus you can fight with samurai, vampires, MechaClowns, angels, demons, Nexans, dragons, etc., etc. The focus of the game is strategy. You play with three decks: Barracks, Armory and Spellbook and on each turn you choose which one to draw from. Combat has three ranges: Long, Medium and Close, moving through the ranges as you fight, with many ways to affect the battle. Long Range weapons give ground troops the chance to shoot down flyers and some weapons can be thrown at opponents. When you defeat an enemy, you can loot the weapons they leave behind. The resource for creating your warriors, etc., is a product of your Mage's HP, as well as the damage you inflict on your opponent. For more information including complete rules, card list and forum, go to http://www.magewarfare.com