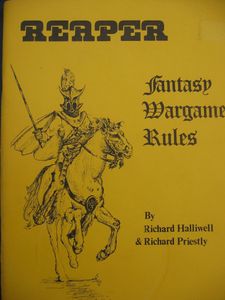 Many people probably won't realize this miniature set was the most likely pre-cursor to Warhammer Fantasy Battle. The second edition was printed by Rick Priestly and Richard Halliwell in 1981. Reaper was written for use with wargame figures and battles with upwards of 30 or so figures per side. Reaper is a flexible rule set which leaves quite a lot up to the imagination of the players.