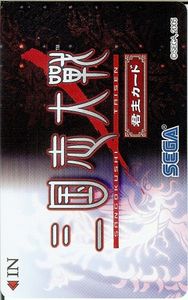 Sangoku Taisen (roughly translates as "Battles of the Three Kingdoms") is one of a new generation of hybrid network games that have recently been introduced in Japan. These games combine arcade gaming, collectible card gaming, and board gaming. This must be played at the arcade and cannot be played at home. The machines have a sensor board which recognizes cards and their placement and movement. Sangoku Taisen is a real-time battle simulation based on the Chinese novel "The Romance of the Three Kingdoms". At the beginning of the game, you place your cards, which represent your units, on the board. Once the battle begins, you move the cards on the board to attack your opponent's units or fortification. The sensors in the board are capable of recognizing the cards you place on the board and are very responsive to movement and facing. The game ends when one player's fortification is destroyed, or when time runs out.