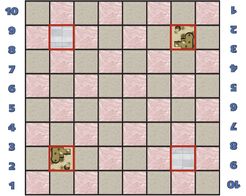 From the Publisher's web site: Strike Force Series Designed to introduce a novice wargamer to conflict simulation, these games rely on familiar mechanics from other games you may have played to allow players to focus on strategy instead of learning new rules. Strike Force: Hunter A quick and dirty game of chasing bad guys, Strike Force: Hunter casts you in a dual role. You are trying to capture your opponent's terrorists while simultaneously attempting to infiltrate your own into his city. This game mixes "Concentration" with "Stratego" and offers several different ways to win... or lose. The entire file is 4 pages. There is a map, a set of markers to be cut &amp; folded, and 2 pages of rules.