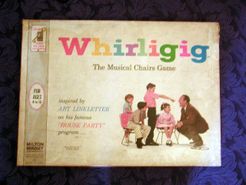 As described by the publisher: Whirligig, The Musical Chairs Game inspired by Art Linkletter on his famous "House Party" program . . . The twelve bears sit in the inner "tubs" as the Whirligig turns. When it stops, players scramble to put the twelve bears into the 11 outer "tubs". Each new "whirl" - there is one bear less, until there is only one - the winner!" The whirligig is lazy-susan type object with small cups or "tubs" to hold small plastic bears. Players take turns rotating the whirligig, which makes music as it turns. Players are encouraged to sing a song while rotating the whirligig.