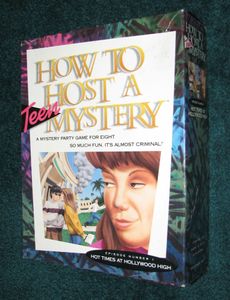 想玩 拥有
How To Host A Teen Mystery: Hot Times At Hollywood High

You are invited to the "Most Likely" Club banquet at Hollywood High School. But when you arrive at the Hardest Rock Cafeteria, you discover that a fire in the science lab turns out to be arson. And test answers are missing from the principals office. As you assume the role of one of these eight cool characters and solve the mystery, you and your guests will enjoy hours of suspense and intrigue. All you need is a sense of humor and a light-hearted approach toward blackmail, theft and deceit. FLETCHER BYSEPPS Voted "Most Likely To Sweat Professionally," Fletcher is a popular football star destined to play pro ball if only he can get a college scholarship. He has dated half the girls in Hollywood - but rawly more dun once. His friends call him "Hex." JUANITA GREENCARDE Voted "Most Likely To Rule A Small Country" Juanita is the beautiful daughter of an elite Colombian importer. Sexy, mysterious and a real tease, Juanita Ekes to steal other peoples friends just for sport. Her current boyfriend is student body president Spence DeMonet. DUNCAN FLUSHWATER A computer and math genius Duncan wants to use his skills to discover faster-than-light travel. He was voted "Most Likely To Warp." Back in grade school, tough kids would get their kicks by flushing his head. This earned him the nickname "Flushie." After changing his image, he is one of the most popular kids. TANYA BUNSOFF A model for top bathing suit designers, Tanya's curvy body and pretty smile recently won her the tide of "Miss Malibu." She was voted "Most Likely To Be Worshiped From Afar." The target of much attention from the boys, Tanya has little interest in dating. BERNADETTE DOWN Bernadette was voted "Most Likely To Hang" (in an art museum). Her recent work, Still Life on a School Bus, is now on display at the museum. Growing up on the streets of Hollywood, she has a tough-girl image. Always dressed in black, she is aloof and distant from most of her fellow students. CAMERON KORDIER "Cam" was voted "Most Likely To Get Snubbed At The Oscars." His new student film, Silence of the Spam, is a documentary about cafeteria food, which has won much praise. Cam dates socialite Chantella Solle, which almost guarantees him a bright future in films. CHANTELLA SOLLE A cheerleader with loads of enthusiasm, Chantella was voted "Most Likely To Sign Autographs." Raised in The Valley, her life changed when her mother gained control of 19th Century Weasel Films and bought a mansion in Bel Airhead. Chantella can't resist a man with a camera and is dating Cam Kordier. SPENCE DEMONET The dashing student body president, Spence was voted "Most Likely To Own California." In addition to being a swell guy, he is also a local hero, having rescued school mascot Murray the Mink from a construction site. Spence's girlfriend is Juanita Greencarde, the sexiest girl in high school. Includes cassette tape which reveals the details of the murder, diagram of Hollywood High School with a map of Hollywood &amp; vicinity, host's guide &amp; instructions, 8 guest invitations &amp; envelopes, 8 player clue manuals containing secret information for each player, 9 sealed secret clues, police investigation sheet, name tags, and a Hollywood High photo album