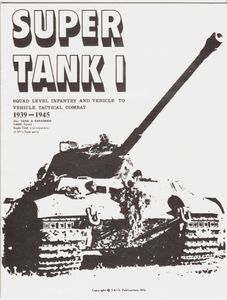 Super Tank I is an expansion to SPI's Tank! Armored Combat in the 20th Century game. Super Tank is more than just an expansion of SPI's game, however, it is a complete revision of the infantry rules. Armored Vehicle rules are mostly in SPIs's rules folders for Tank. The infantry in Super Tank are played sequentially while the vehicle and gun units remain simultaneous. This makes large numbers of infantry easier to game... The hexes on the large map are one inch to allow play with 1/285 miniatures. The player will find that he has all the units he needs for all WWII types of attack and defense, including cavalry, machine guns, mortars, bridge laying AFV, rocket launchers and many other new types of units. Super tank is truly a combined arms game. Game components include one 34" by 54" map (!) two mini 11" by 17" plotting maps, two Terrain and combat tables, eight (!) 11" by 14" die cut counter sheets (448 infantry, 960 Armored Vehicles) one booklet of rules, and three zip Lock bags. Game includes just about every tank made by anyone in WWII, each unit rated for Front, Side and Rear armor, as well as AP/HE factors, Range and Movement. An awesome game! Expands: Tank! Armored Combat in the 20th Century