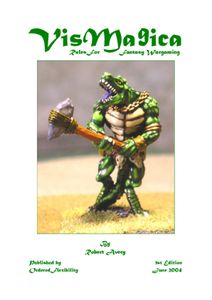 From the publisher's website Rules for Fantasy Wargaming! Fantasy wargaming system based on the popular Vis Bellica rules for Ancient &amp; Medieval wargaming. Figures based as chunky elements that correctly represent ground scale. Easy to move round the table and look good. An average game consists of about 120 figures a side, and takes about 2½-3 hours of play to resolve. A combat system that doesn’t involve complicated book-keeping or rolling more than two or three dice at a time. A command structure where figures are grouped as regular ‘brigades’ or irregular ‘contingents’ that report to officers that report to more senior officers. A command system where officers could, on a parade ground, successfully issue a limited set of orders to the figures under their command, but this ability breaks down rapidly as the 'fog of war' descends during a battle. Hidden movement possible without the need for a referee. An army list philosophy that allows you to use any figures from any manufacturer: to use your imagination!