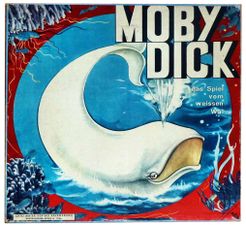 (the german subtitle means: The game of the white whale) An early oddity in the Ravensburger program: The game consists of an elevated round course with an underlying rotating cardboard disk - on their turn the players rotate the disk. Whenever a whale symbol appears, a small plastic whale miniature is put on the course. The players now try to catch the whale with their ships (= reach the whale miniature), before it dives again (a hole in the rotating disk lets the miniature disappear into the game box). The rotating disk also constantly changes the values for different whaling goods at a stock exchange. The player selling his cargo for the highest price wins. Sometimes a white (plastic) whale appears which cannot be caught, but the player "wounding" Moby Dick gets a gold doubloon worth 200 $.