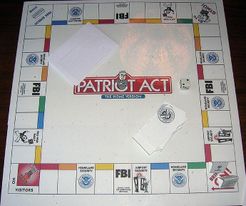 Board and mechanics are based on Monopoly. According to the publisher's website; PATRIOT ACT: The Home Version, is a game inspired by the historic abuse of governmental powers of the same name. Many of the hypothetical situations in the game are based on real-life events. Either as a game to be played or as a statement to be read, Patriot Act: The Home Version educates the user to the current erosion of our civil rights by the government while claiming to be protecting our freedoms. John Ashcroft may no longer be Attorney General, but his legacy lives on in the anti-freedom legislation that this game is a tribute to. The game is free and can be downloaded here: http://www.graphix4change.com/portfolio_PA_game.html