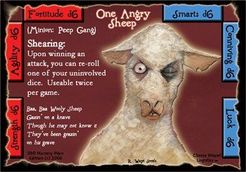 Each player controls a character with six different traits, each represented by a different kind of dice (d6, d8, d4). Players choose which traits they wish to attack in and the players roll dice for the attack. Twisted little characters duke it out with dice. A fast-paced, strategy dice game played head to head using a combination of character attributes, special abilities, and lots of dice. (From the website) There are two editions to choose from: Nursery Wars - the gang from the Mother Goose tales gone horribly wrong, includes Ma Goose, Bo Peep, the Mice and One Angry Sheep; and the Gangland Edition, featuring 20s style mobsters such as Knuckles, Malice, and The Shadow. A single game can be played in five minutes, but has a Boss/Minion variation for those who want more dice and strategy options. Each set of Death by Dice includes two character boards and rules. 10 sets in all, dice not included.