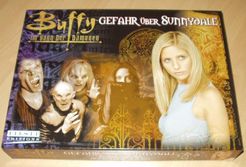 "Gefahr über Sunnydale" (Sunnydale in Danger) is an adventure game based on the television series "Buffy the Vampire Slayer". One player battles as the great master the other players who use 5 of 6 heroes (Buffy, Xander, Willow, Giles, Oz and Riley), each with his own special ability. The great master chooses secretly one of 4 scenarios, which determines amongst other things the boss monster (Master, Spike, Wilkins III or Adam). The game has 2 phases. Phase A is the investigation phase, where the heroes move through the town of Sunnydale to find 5 pieces of evidence about the boss monster while battling hordes of minor monsters. Battles are fought with rolling dice and comparing strength and stamina. When the heroes have found who the opponent is and where he lives, phase B - the confrontation phase- starts, which is played on the backside of the board and consists of one battle between the heroes and the boss monster and his surviving adjutants.