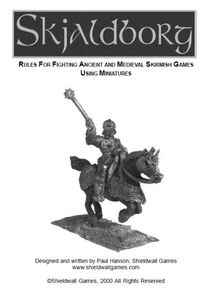 Skjaldborg is a set of skirmish rules for medieval miniatures. Capable of handling fairly large numbers of troops once you get the system down. It uses several unique mechanisms to portray medieval combat nicely at the 1:1 level. Units tend do get into disarray through combat and movement, no big blocks of troops that stay in good order till they run away. Formations are not mandatory but they prove to be useful. You will see WHY they are a good idea, instead of being forced to use them. And to top it off, the rules are shareware. Download em and see if you like em, if ya do you can send some $$ to the creators, if ya don't like em, no worries.