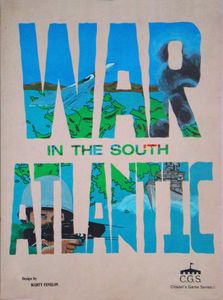 "War in the South Atlantic" is a simulation on a ship/aircraft/battalion level of the war in the Falkland Islands during 1982. The major islands of the Falklands are represented along with the ocean areas where the action took place." WITSA is a pretty standard wargame for its era. It simulates all the major aspects of the Falklands War: air, naval, and ground combat. Game scale: Each turn represents two hours. Each hex represents five nautical miles. Each ship counter represents a single ship. Each aircraft counter, from one to five aircraft. A ground unit counter can be anything from a platoon to a battalion. Turn sequence: "Each player moves his units and executes attacks on enemy units in turn during each of the air, sea, and land phases [...] Units expend movement points to move from one hexagon to another. All air and sea combat is resolved during the movement portions of the turn while land combat is resolved at the end of the movement phase. To simulate the randomness of combat results, a die roll is used to resolve attacks [...] As turns are completed, aircraft will cycle through various stages of readiness, ships will run low on fuel and ammunition, and the weather will play havoc with commanders' plans."