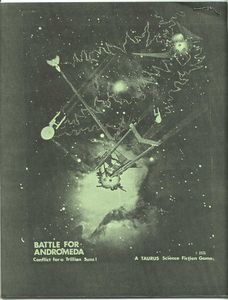 想玩 拥有
Battle for Andromeda: Conflict for a Trillion Suns!

The game is set on a grand strategic level with each player controlling a civilization. There are six civs supplied, all with the same basic units and each culture haves "secret weapons" which give the ships some differences. The starships come in various classes which are similar to the various naval ship classifications but on a much larger scale. The turns consist of 14 phases covering the movement and combat for non-mobile unit, major mobile units and minor mobile units. There is also an Industrial inter-phase every third turn which is used to adjust the amount of resources available to each player. The rules contain many special cases and details but with no index looking up any specific clause is difficult. According to a Galaxy-Foundation Games catalog, they licensed Taurus to produce an initial print run of 6,000 copies of this game. It is not known if GFG did any further print runs. There were further games in GFG's strategic series: Deliverance From Beyond the Stars, The Xenon Empire's Star Wars: Crusade Against the War-Lords, and The Collodian Conspiracy: Science Against Chaos Unleashed. These games used Andromeda Foundation Official Battle Manual, which is a slightly changed version of the Battle for Andromeda rules, as the series rulebook. There was a companion tactical series of games beginning with Warriors of the Dark Star: The Age of the Neutron Wars. From the GFG catalog (reproduced verbatim): The Battle For Andromeda - Conflict for a Trillion Suns, is the title of the over-all Strategic Series. It is on these boards that the history, the fleets, the hundreds of worlds, star systems, space armies, etc., are covered. The player handles FLEETS, LARGE SCALE DECISIONS as a RULER-COMMANDER of an ENTIRE CULTURE. He is concerned with over-all scientific Progress, the Huge Wars, and their effects and the mass movements so shown in the "BFA" Scale.