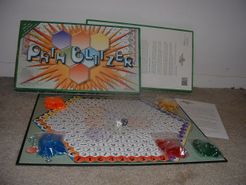 In this game, the players try to build a contiguous path across a hexagonal grid. Each turn, a player rolls a pair of d10s; every cell in the grid is numbered, and a token may be played in a cell only when the number is rolled on one of the dice, their sum, or their difference. If one occupies two of the adjoining cells, it is possible to attack (by a risk-like 1-1 die comparison) a token belonging to another player: a successful attack replaces the token; an unsuccessful attack permits the defender to play an extra token using the two die rolls used during the attack. Dice that show a zero, or combine to zero or ten permit a placement anywhere; doubles may be additionally employed for additional turns. The manufacturer says: "Family fun for ages 8 through adult. Anyone can successfully play this game. And anyone can win, regardless of age, experience, or skill."